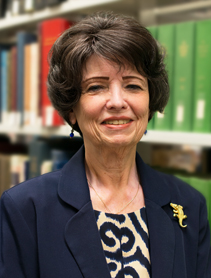 Judith C. Russell has served as the Dean of University Libraries at the University of Florida since 2007. The libraries of the University of Florida (UF) form the largest information resource system in the state of Florida and serve every college and center in the university, including the Institute of Food and Agricultural Sciences (IFAS) and the Health Science Center. The UF library system consists of seven libraries, six of which comprise the George A. Smathers Libraries. The Smathers Libraries actively collaborate with the Legal Information Center, which is a part of the Levin College of Law. As dean, Russell is responsible for the tenure and promotion of all library faculty at UF.

Russell was the Managing Director, Information Dissemination and Superintendent of Documents at the U.S. Government Printing Office (GPO), now the Government Publishing Office, from 2003-2007. She served as Deputy Director of the U.S. National Commission on Libraries and Information Science (NCLIS) from 1998-2003 and as director of the Office of Electronic Information Dissemination Services and the Federal Depository Library Program at GPO from 1991-1997.

She worked for over ten years in the information industry, doing marketing and product development as well as serving as a government-industry liaison. Her corporate experience includes Information Handling Services (IHS) and its parent company, the Information Technology Group; Disclosure Information Group; Lexis-Nexis (then Mead Data Central), and IDD Digital Alliances, a subsidiary of Investment Dealers Digest. She also worked for over 10 years in special libraries.

Russell holds a Master of Science in Library Science (MSLS) from The Catholic University of America in Washington, D.C. She is tenured at the University of Florida with the rank of University Librarian, the equivalent of full Professor.

Russell received the NFAIS 2017 Miles Conrad Award, long considered the information community’s premier annual honor for achievement in fostering the growth of information services, in recognition of her significant achievements in librarianship and for her leadership in information services throughout a career spanning academia, government, the non-profit and private sectors.