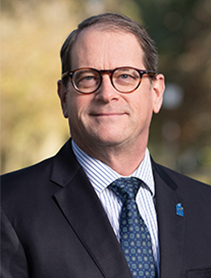 Dr. George Ellenberg serves as University of West Florida’s chief academic officer as Provost and Senior Vice President. Prior to his appointment, Dr. Ellenberg served as Vice Provost and previously as Associate Dean of the College of Arts and Sciences.

A Professor of History, Dr. Ellenberg began his UWF career in 1994 as an assistant professor in the Department of History. He has taught courses in southern history and American military history and has received numerous awards for excellence in teaching. He is an alumnus of the Summer Institute in Military History, United States Military Academy at West Point. His areas of research and teaching interests include agriculture and culture of the American South, especially draft animal use, mechanization, the cultural intersection of mechanization and modernization, and agrarian thought. Dr. Ellenberg’s book, Mule South to Tractor South: Mules, Machines, and the Transformation of the Cotton South (2007) received the Anne B. and James B. McMillan Prize from the University of Alabama Press, and the monograph was reissued in paperback in 2014.

Dr. Ellenberg received a doctorate in history from the University of Kentucky, where he was a Thomas D. Clark Fellow. He holds bachelor’s and master’s degrees from Clemson University. He is married to Karen Thomson Ellenberg, and they have three sons.